“The Man is comin’, Sheriff…bringin’ the hounds of Hell with him…” 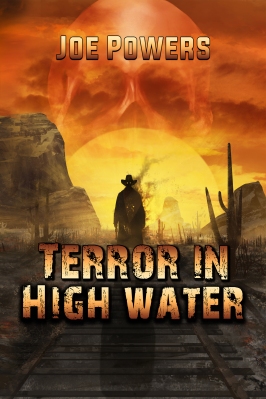 Available at numerous outlets, including:

Can’t find it on the shelf where you live? Your local book seller can order directly from the publisher!

Terror in High Water is also on Goodreads. 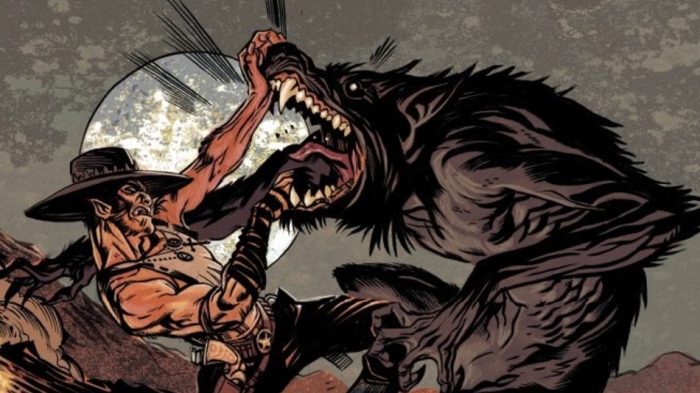 On a hot morning In 1830s Texas, a cattle rancher limps into the tiny, isolated town of High Water. He’s battered, bloody, and near death but insists on speaking to the sheriff. “The Man is coming,” he warns, “and he’s taking over this town.” The townspeople fearfully brace for the newcomer’s arrival.

The Man arrives with his gang of Hell Hounds in tow, brutally kills the sheriff, and declares the town his. Thus begins the reign of terror by the sinister band who, as the people soon discover, are more than meets the eye. The residents of High Water are terrorized, threatened, and forced to pay tribute to their cruel oppressors with violent repercussions for any who dare to resist.

But there is hope.

A story begins to circulate, in hushed whispers, behind closed doors. The legend of a renowned gunslinger and monster hunter who walks the earth, his sole purpose to seek and destroy the minions of hell. The people are held in the grip of terror, fearful of the consequences should they take a stand. But one young man will risk everything to escape The Man’s clutches, to locate the Legend and bring him back to banish the evil from High Water.

Is the legend real? Does the gunslinger still live? Can one man defeat the overwhelming odds and destroy the great evil that grips High Water?

Do legends ever die?

Praise for Terror in High Water:

“Terror In High Water is not your grandfather’s Louis L’Amour western, but a chilling 1830s period tale of a living hell, derived from the creative mind of acclaimed horror author Joe Powers. He takes a fresh look at the genre so prevalent, and popular, in the industry in 2019 in this page-turner and takes the reader on a dusty ride that shows you the path to redemption can be something you would never expect in such vivid colours of suspense and conflict. The book will remind the reader of such previous classics as DC’s Jonah Hex and Clint Eastwood’s High Plains Drifter, but it spins that familiar scenario on its head via the various twists he puts his characters, and the reader, through. But be warned, as you delve deeper in the novel you may have to go back to it time and time again once you finish it to remind yourself that if you believe in legends on both sides of the coin of good and evil, and hate and love, this tome might prove it 10 times over”

“Set in the Texas little town of High Water, there is fear. The Man is coming and there is nothing the citizens can do to save or protect themselves as the invasion subtly begins and ends. A Dark mysterious man has come with his own rules and pack of Hell Hounds. If you disobey them, you die.

This is the world that Joe Powers has taken us to in Terror in High Water in his first ever published book. This story set in the old west, this slow suspenseful, thriller takes us by the hand for the ride. The Man has arrived and Joe Powers has given us the epic good vs. evil journey into The Man’s solitary rule over High Water. If you disobey the order’s of The Man, your life is gone and fed to his Hell Hounds, a cannibal crew.

The only man that can save this town is an old, reluctant gunslinger, Samuel Heilig. A man who has not fought or fired a gun in many years and would rather not be involved.

As the reader is taken on the suspenseful journey you can picture the town, its citizens and the anxiety their new stranger has created. Joe Powers has made you see and feel the emotions that is featured on each page. The effect of this is a sure page turner as doubt is in your mind on how this may end.

The story is a great read for people that like to be taken away.”

“OK, let’s take a good old fashioned western story complete with a frontier town at the edge of nowhere and tip its reality bit-by-bit until it crashes into the universe of demons and hellfire. Toss in a broken demon fighter who’s not happy that he has to clean up a mess that he left undone on another continent years earlier and you have a formula for a whole new concept of a high noon showdown.

Terror in High Water is the debut novel of Joe Powers…and what a novel. The writing is crisp and evocative enough to overcome the age-old “town in trouble, need savior” storyline with an extremely Goth approach to a western. One man talks with an Irish accent, but everybody else sounds like they just stepped out of the head shop down the street and, honestly, I hate reading period pieces thick with words that make me stumble over meanings while I’m trying to read the story. Thank you, Mr. Powers, for not putting us through that.

This is a well-told story by a promising writer. Looking forward to more.”

– Biff Mitchell, author of The War Bug, The Reality Wars

A great blend of western, horror and mythology

Joe Powers’ debut novel is an engrossing and engaging read from the first page. It conjures up the classic setting of a Western, while making you feel for the townspeople’s isolation and helplessness after the antagonists ruthlessly took over the town. Powers isn’t afraid to kill off characters—characters you think would survive. I love a good story you cannot predict its ending and this is one you will enjoy. This can be adapted into a movie. I hope to read more of Powers’ work, what a great start this is.

“A real page turner!
The crossing of the western and horror genres was something new and very compelling for me. It really pulled me in, keeping me up into the wee hours of the morning, telling myself “Just one more chapter” and a surprise ending with some tantalizing possibilities.”
– Amazon Review
*****
“NB Author Joe Powers will keep you looking over your shoulder if you read this story during the nighttime. Set in the “old west”,evil people (beings) take over the town. While not the usual genre I choose to read, I enjoyed this novel. Well done Mr. Powers.“
– Allan, Goodreads Review